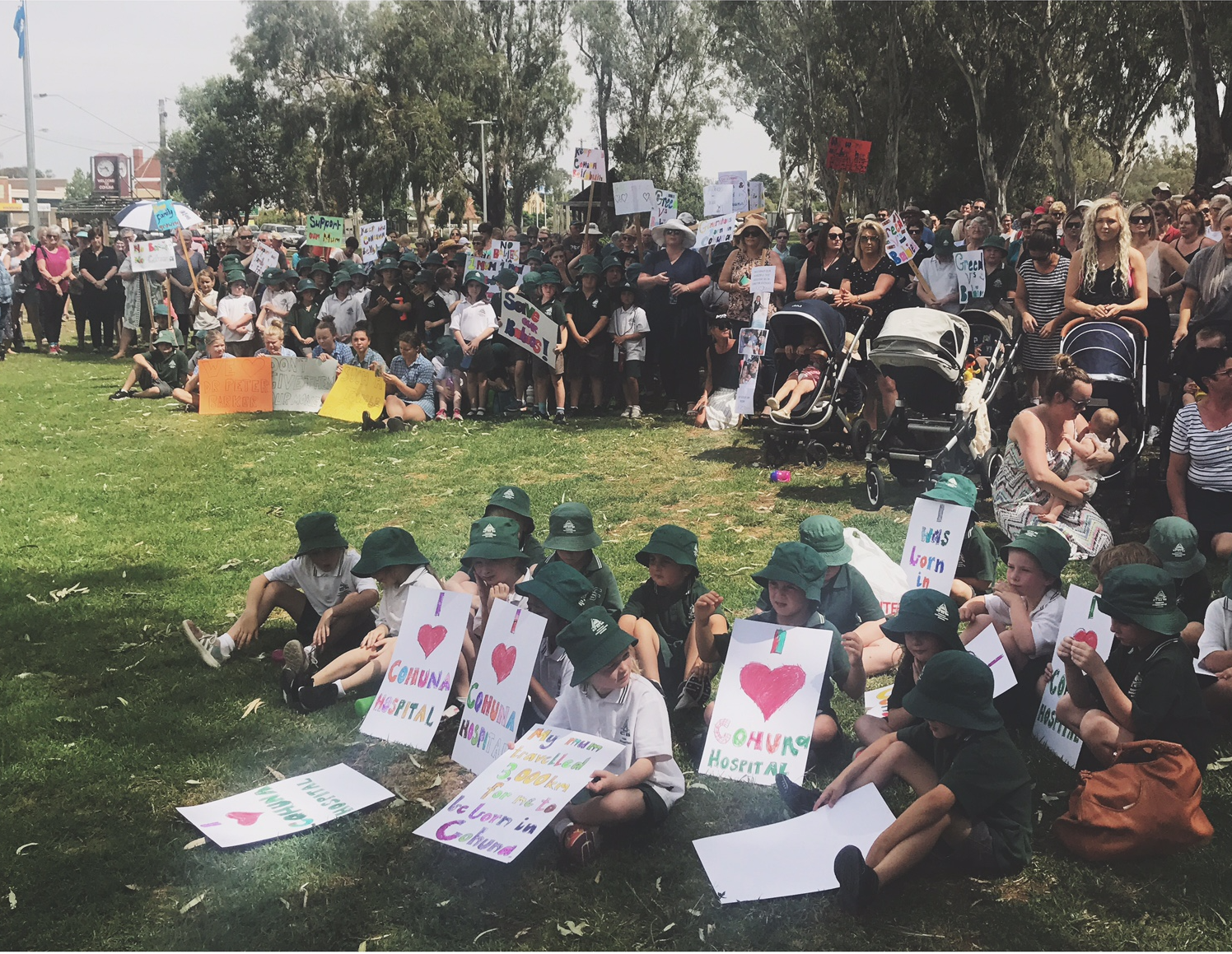 This blog post is dedicated to the events that happened in Cohuna at the Hospital last week. I think it’s an issue that everyone needs to understand. Small rural communities are fighting for medical services every day. Tim is on our Local Health Medical Trust in Barham and they have lost two great Doctors this year because of changes higher up and a complete disregard for our community. Last weeks events in Cohuna were no different.  I thought I’d outline what happened last week in Cohuna as far as I understand it and I hope it helps you to understand the difficulties we have in rural communities in securing and maintaining health services. It’s not because of people here in the communities who work tirelessly, it comes from people higher up making il-infomred decisions and something needs to change.

Last week on Monday the 13th of November, for no apparent reason and all of a sudden Dr Barker and the Cohuna hospital staff were told by the administration of Echuca Regional Health, who manage Cohuna Hospital that the decision had been made to bypass all obstetrics services from Cohuna hospital effective immediately. After some negotiation Dr Barker managed to negotiate to keep services open until the Friday at which time the management would visit again to discuss the bypass.

Dr Barker took some time over the course of Monday and Tuesday to investigate what was going on and was unable to find any clear answers as to why this had happened and why so suddenly. The only thing they told him was that he was the sole GP doing obstetrics and so must be tired but they had never discussed this with him.  They also said that Safer Care Victoria had said there were safety concerns. Dr Barker contacted Prof Euan Wallace the head of Safe Care Victoria and he said there were no safety issues being discussed at Cohuna Hospital.

Tuesday night a message went out to community via social media of what was happening and by 11am the next morning there were over 250 people as well as media gathered in the Cohuna Park to hear from Dr Barker. It was pretty incredible. The Primary School turned up with gorgeous little banners, which brought a tear to my eye and I am sure many others and the whole community showed how much they value their hospital and it’s staff. I spoke about how much I love the hospital and the fact that it was pretty terrifying not knowing where we would deliver our babies now, especially seeing as though I’d already had one on the side of the road and it was frightening! This decision had myself and 40 or so other women left with no idea what we were meant to do if we went in to labour. We weren’t booked in to other hospitals, we hadn’t met other doctors and nobody from Echuca Regional Health had contacted us. What were we to do?  I felt it was completely insulting and a complete disregard for the women in our community. I was worried not so much for myself but for all the first time mothers or for those with mental health issues. What if some of the women due to give birth had prenatal depression? How would this effect them?

That night the events were reported on the news and on social media and as well as radio, still with no clear explanation as to what was going on.

For the next few days we were in limbo, not knowing what we should do.

On Friday meetings were scheduled with the Echuca Hospital Administration including the CEO Michael Delahunty and the Director of Medical Services, Dr Howlett and the GPs and hospital staff. Once again the community gathered around in peaceful protest to show their support for the hospital. Following the meetings Dr Barker came out to make a statement and confirmed that the hospital had been placed on bypass for all obstetrics with no real reason given, other than that they felt it was too much for Dr Barker by himself and it was unsafe. So the Doctors had decided that if they were unsafe to complete obstetrics services then they were unsafe to complete all the other far more risky services they complete at the hospital on a daily basis and so they went on strike effective immediately and placed all services on bypass.

News of this once again quickly spread via social media and the community were very upset, but fully supportive of the Doctors decision.

Luckily, this only lasted for 4 hours when we were notified that all hospital services were back up and running, including obstetrics.

So for now, we have a good result, but I fear this is not the end of it and I really question what on earth is going on?  There’s a few things that I really think need further scrutiny and answers.

Dr Barker has written an extensive letter to the Ministers and in it he states that we have witnessed a planned, organised, and institutional oppression of rural women and a blatant attack on their safety. I totally agree with this and I am really appalled at what has gone on.

I think last weeks events showed what a small rural community can do when they are under threat and that we will not stand for that sort of treatment. We have a perfectly good, safe, operating hospital which is cherished and highly valued in this community and we will fight for it.

I’m so proud to be part of this community and I’d like to say a big thank you to Dr Barker and all the other Doctors and medical staff in Cohuna for your brilliant display of leadership in the face of such an insulting display by Echuca Regional Health last week. Our community has shown that when people stand up and fight for what they believe in great things can be achieved. This community will not let you take our hospital away and there are some serious questions that still need answers.

I would encourage anyone in our community to write letters to the Health Minister and ask for more answers. We can’t let this go as it will happen again. 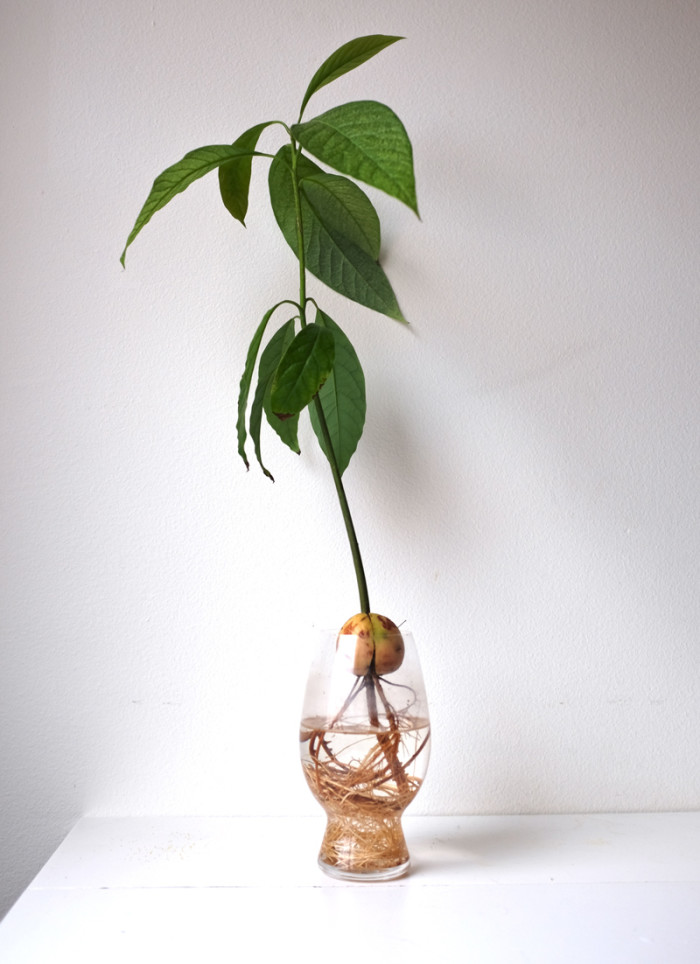 When will my avocado tree produce fruit?

“I’ve got an avocado tree in the backyard and it still hasn’t produced any fruit. It’s 5 years old now and it looks good but it just doesn’t have any avocados. When can I expect to get fruit from the tree?”

I get asked this question so often and I always feel bad as I know you have been patiently waiting and anticipating the first fruit and I have to answer and say that it’s pretty unlikely that the tree will ever have any fruit.

All our trees come from grafted seedlings, which means a tree that produces well has been grafted on to a rootstock tree which is the base so that you can be guaranteed to get a good producing tree.

It takes about 4-5 years for an avo tree to start producing fruit anyway so it’s certainly not a short term thing even with a proper seedling.

So if you really want to grow your own tree at home, the best thing to do is go to a local garden centre and buy a grafted seedling. People also often say “do I need to have two trees to get fruit, and the answer is no, but if you have two trees you will increase your chances of getting more fruit.

The reason for this is that avocado trees actually have male and female flowers on the same plant. Lots of peopel think that you have to have two trees, a male and a female but this is not the case as a single tree can have both male and femal flowers – how cool is that?! The tree’s flowers can open up as male one day then close that night and open up as a female the next day! The only condition is we need nice warm nights for this to happen – 3 nights over 10C in fact, otherwise the female flowers don’t open. Aren’t trees amazing!

So while it might be fun to grow you own plant form seed inside for a while and watch it grow, it’s not going to be the answer to your avocado spending wows. If you really want to grow some avos, head to the nursery and buy a seedling. It is fun to grow you own plant from seed though in a jar on the window ledge and the kids will love it but just don’t expect it to save you from having to buy avos in the future – just keep buying them from us ;).

I’d love to hear if you’ve had any success growing avocados from seed or if you are still waiting!